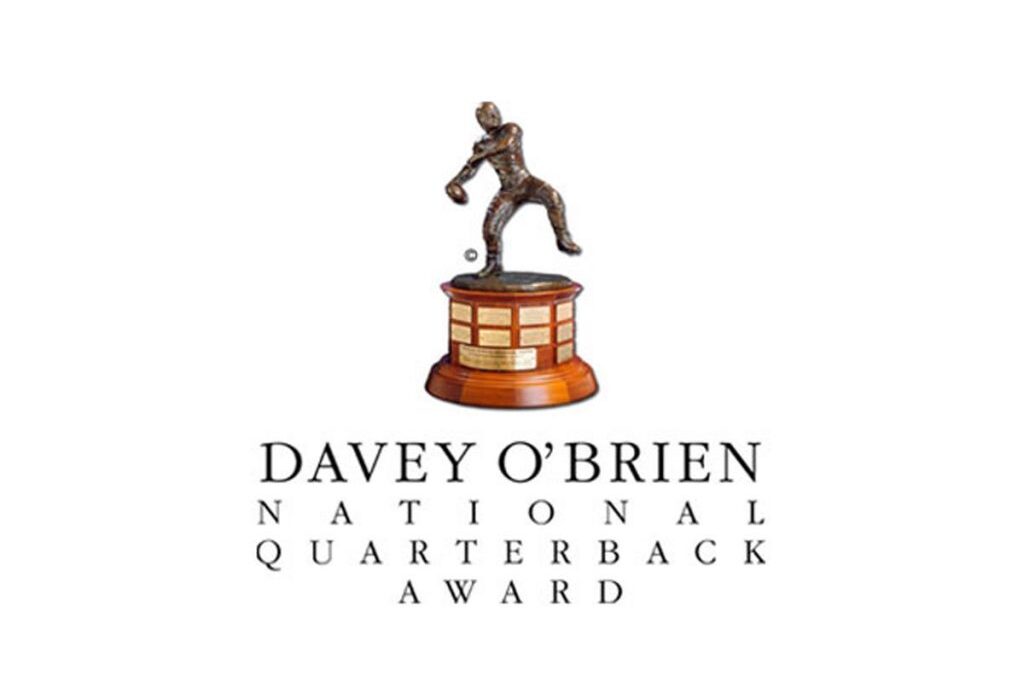 FORT WORTH, Texas – Alabama’s Mac Jones, Clemson’s Trevor Lawrence and Florida’s Kyle Trask have been selected as the three finalists for the 2020 Davey O’Brien National Quarterback Award. The honorees were named based on the results from the Davey O’Brien National Selection Committee’s balloting as well as social media fan votes courtesy of the Davey O’Brien Fan Vote.
All three players are first-time finalists for the award. Jones is seeking to become the Crimson Tide’s first-ever winner, while Lawrence would join fellow Tiger Deshaun Watson (2015, 2016) and Trask would be the third Gator, following Danny Wuerffel (1995, 1996) and Tim Tebow (2007).
Jones, a junior, has connected on 250 of 327 passes (.765) for 3,739 yards and 32 touchdowns against four interceptions. He leads the nation in passing efficiency (202.4), total quarterback rating (95.6) and completion percentage. The native of Jacksonville, Fla., also ranks second nationally in both passing yards and passing touchdowns.
The 6-3, 214-pound Jones also is among the national leaders in points responsible for (5th, 198) and total offense (6th, 339.1). He has topped the 300-yard passing mark seven times, including four 400-yard games. He has guided the Crimson Tide to an 11-0 record and the No. 1 seed in the College Football Playoff Rankings.
Lawrence is 198-for-286 passing (.692) for 2,753 yards and 22 touchdowns, while also rushing for 211 yards and seven scores. He ranks seventh in FBS in total offense (329.3) and eighth in total QBR (85.6). The product of Cartersville, Ga., also is listed nationally in passing yards (10th), passing efficiency (11th, 172.7), touchdown passes (12th) and points responsible for (12th, 174).
In nine games, the 6-6, 220-pound junior passed for more than 300 yards five times with a pair of 400-yard games. Clemson (10-1) is 9-0 in contests started by Lawrence and is the second seed in the College Football Playoffs.
Trask, a senior from Manvel, Texas, has completed 285 of 409 passes (.697) for 4,125 yards and 43 touchdowns, leading the country in both yards and passing scores. In addition, he ranks first in points responsible for (278) and is second in total QBR (90.4).
In 11 games, the 6-5, 240-pound signal caller has nine 300-yard passing efforts, topping the 400-yard plateau five times, and had seven tilts with at least four touchdown passes. His 379.5 total yards of offense per game ranks third nationally. Trask has steered Florida to an 8-3 overall record and the No. 7 ranking in the College Football Playoff Rankings.
The Davey O’Brien National Quarterback Award, first issued in 1981, is the nation’s oldest and most prestigious quarterback award. The Foundation’s national selection committee is comprised of journalists, broadcasters, commentators and former winners.
The Davey O’Brien Fan Vote instituted a change to its format in 2020, as fans voted for their favorite quarterback’s post from the Davey O’Brien official accounts via three social media platforms—Instagram, Twitter and Facebook. The top five vote getters on those platforms each received bonus committee member votes. The bonus vote recipients and there vote totals, were Notre Dame’s Ian Book (6.5), Trask (5.5), Coast Carolina’s Grayson McCall (3), Jones (2.5), Ole Miss’ Matt Corral (1.5), Cincinnati’s Desmond Ridder (1.5), Oklahoma’s Spencer Rattler (1) and UCF’s Dillon Gabriel (1).
The next step in the process will be to select the award’s winner from the three finalist quarterbacks. Final round fan voting is now open and will close on Wednesday, Dec. 30. National selection committee voting will take place through Dec. 30.
The winner is to be announced live on Thursday, Jan. 7, 2021, on the 30th annual The Home Depot College Football Awards, which will be held virtually from 7-8:30 p.m. (ET) on ESPN.